Transport Minister Datuk Seri Ong Tee Keat could have taken the easy way out and swept the PKFZ issue under the carpet. Instead, he chose the more difficult path in the name of greater accountability and transparency.
Posted by Chuah Boon Seong No comments:

Umno should take the lead to change......

When you meet someone who is really frank......

7 August was a special day for me, for I was able to meet one of the residents in Mentakab, sat in his car and accompanied to visit a location, part of a road which was complained several years ago(I was not even a wakil rakyat then) and had not been attended since then.

That morning, when I reached my office premises and before entering the office, I met him, after talking for a while, he introduced himself, then only I realized he is one of the prominent lawyer in Mentakab, Mr Karam Singh.

During our conversation downstairs, he was very critical about BN yet all this while he supported BN(I supposed till 2008 election). Nowadays, it's not easy to meet people who is willing to tell you frankly that he is critical about you or your party. People may either shun you or keep to themselves what they think about you or your party. I listened patiently about his annoyances about BN and the words he used may be a little bit harsh, however i still listened. As a wakil rakyat, under such situation, some may have simply turn away and rather not continue the conversation/listening, I respected him as a senior and I listened patiently.

Finally, he mentioned about a dissatisfaction which he did complain before(several years back) and he invited me to go into his car and have a look at what he has described.

I went into his car and he drove me to the location to see what he has described.

It is the duty of the housing developer to resurface the existing road and the duty of the Majlis Perbandaran to oversee that the job is done rather than letting go the developer. I can understand why some rakyat are angry, these unscrupulous developer at the expense of the people and cheating on the government to make their money.

After coming back back from the visit, I called the Jurutera Majlis Perbandaran to request some fund to attend to the request of the residents and also wrote a letter formally requesting the attention and work to be done.

There is one thing worth mentioning, before I left Mr Karam Singh, he held my hand and put on his chest and thanked me for willing to listen to his grouses and came along to have the visit.

During then, i could hear the Sikh prayer playing through his car cassette. He is a religious man and a nice man although sometimes he may use harsh words, however I still considered it to be my lucky day to be able to meet someone who is critical about my party and yet frank to tell me that.
Posted by Chuah Boon Seong No comments: 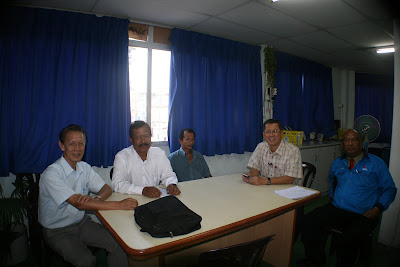